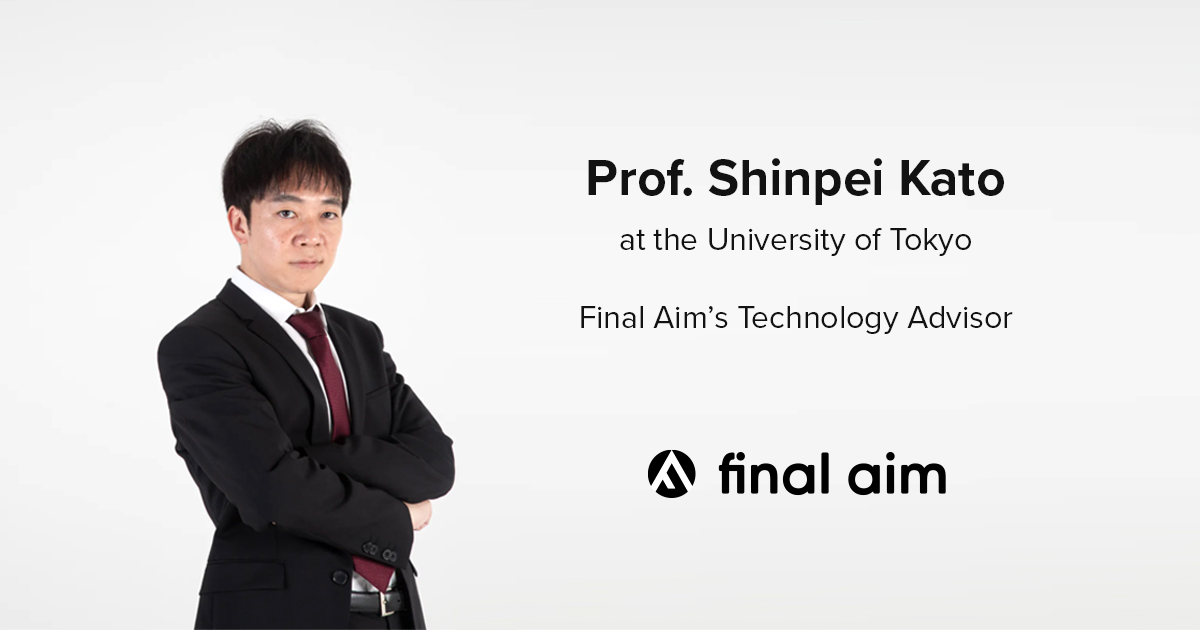 Tokyo, Japan, April 20th, 2021 – As a leading company to support zero-to-one business creation, Final Aim, Inc., (Bunkyo-ku, Tokyo, CEO Masafumi Asakura and CDO Yasuhide Yokoi), proudly announced the appointment of Professor Shinpei Kato at the University of Tokyo as the company’s Technology Advisor.
As an expert in deep tech domain including computer architectures and operating systems for embedded and real-time systems, cyber-physical systems, as well as parallel and distributed systems, Professor Shinpei Kato now works for the Graduate School of Information Science and Technology at the University of Tokyo.

Professor Shinpei Kato also works at Nagoya University. He is a co-director of Embedded Real-Time Systems Laboratory (ERTL) and Parallel and Distributed Systems Laboratory (PDSL) in the Department of Information Engineering.
Outside academia, he is the Founder and CTO of Tier IV, Inc., one of the top leading deep-tech startups dedicated to sharing technology for safe intelligent autonomous vehicles where he leads the Tokyo and Silicon Valley office.
Correspondingly, he is the Co-founder and the Chairman of Board of Directors of the Autoware Foundation, which is the world’s first all-in-one open-source software for self-driving vehicles and hosts the world’s largest autonomous driving open source community.
And previously, he was an associate professor at the Graduate School of Information Science, Nagoya University from 2012 to 2016. He was also a postdoctoral scholar at Keio University, the University of Tokyo, Carnegie Mellon University, and University of California, Santa Cruz.

He received his B.S., M.S., and Ph.D. degrees from Keio University in 2004, 2006, and 2008 respectively. His research performed at Keio University was on multiprocessor scheduling theory and practice for safety-critical embedded real-time systems.
He also contributed a great deal to the advanced humanoid platform project directed by his advisor, Prof. Nobuyuki Yamasaki, in collaboration with Digital Human Research Center at AIST. During his Ph.D. program, he won the research fellowship (DC1) from JSPS in 2006 and the annual Young Author Award from IEEE Computer Society Japan Chapter in 2008.

After he graduated from Keio University, he became a JSPS postdoctoral research fellow (PD) at University of Tokyo, and worked in part as a member of the dependable embedded operating systems project directed by Prof. Yutaka Ishikawa.
In the fall of 2009, he was selected for the JSPS Excellent Young Researcher Overseas Visit Program to join Real-Time and Multimedia Systems Laboratory (RTML) directed by Prof. Raj Rajkumar at Carnegie Mellon University (CMU) through the summer of 2012.
While he was at CMU, he took an initiative in research on GPU real-time computing, and now the autonomous vehicle developed in RTML, a.k.a. BOSS, is employing this cutting-edge GPU technology.
In July 2012, he moved to Systems Research Laboratory (SRL) directed by Prof. Scott Brandt at University of California, Santa Cruz (UCSC). In SRL, he led the QoS-aware storage and GPU-accelerated RAID6 projects.
As of April 2012, he has worked at Nagoya University as a tenured faculty member.

Final Aim has started with ambition to support zero-to-one with design and technology and to create a world where anyone can start a business regardless of nationality, academic background, age, and gender. Its projects had been expanded from Japan to Singapore, Indonesia and to Rwanda. A partnership with a Singapore-based startup in robotics, OTSAW Digital Pte Ltd., a collaboration with Tier IV Inc., and a joint-research with Sony Design Consulting Inc. are our great milestones. Final Aim continues its challenge for upcoming startups and new business development divisions in large corporations to support their zero-to-one steps from both service and product specialty.